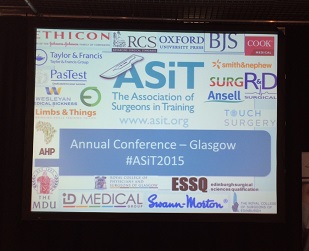 Swann-Morton recently participated at the annual Association of Surgeons in Training conference held this year at SECC in Glasgow. Sales & Marketing Director, Chris Taylor and Customer Support Manager, Adrian Glossop, were invited to present the coveted Silver Scalpel Award at the Gala Charity Dinner held at the iconic Glasgow Science Center. The Silver Scalpel Award recognizes trainers who go the extra mile for their trainees and promote the highest standards of surgical training. From the five nominees the 2015 winner was announced as Mr. Shafi Ahmed, Consultant General and Laparoscopic Surgeon at the Royal London Hospital. He is also the colorectal cancer lead at Barts and the London Hospital Trust and Director of surgical training. He is renowned in the region for his excellence as a trainer in laparoscopic colorectal surgery and his innovative teaching methods including pioneering the use of wearable technology in the operating theatre. He has used Google Glass to live stream surgery to a global audience of 12,500 viewers. Mr. Ahmed is also Associate Dean of the Barts and London Medical school where he is passionate about getting surgery back to the centre of the undergraduate curriculum and under his leadership the medical school has climbed from 20th to 4th place in the national rankings. He is held in exceptionally high esteem by his trainees and in 2014 they organised a grass roots campaign to have him elected as the youngest member of the Council of Royal College of Surgeons of England.